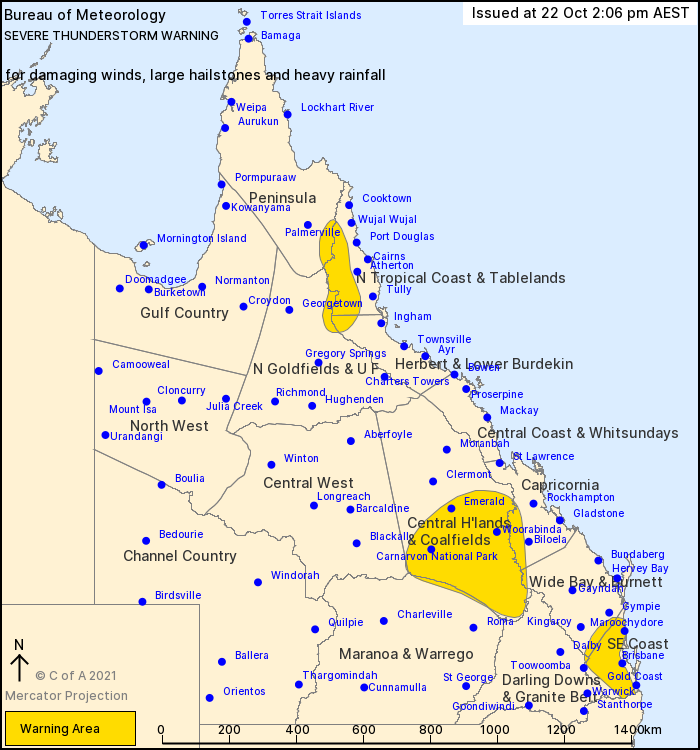 Large parts of the state are bracing for another bout of stormy weather, wild winds and heavy rainfall this afternoon.

Severe thunderstorms were detected on the weather radar near Conondale. These thunderstorms are moving towards the northeast, and are forecast to affect Nambour, Mapleton, Yandina and near Eumundi.

“Damaging winds, large hailstones and heavy rainfall that may lead to flash flooding are likely.”

Earlier today, 101mm was recorded in one hour at Brisbane Airport, as was a “weak tornado”.

Meteorologist Pieter Claassen says heavy rainfall is also expected to pelt the north of the state this afternoon.

“Falls of up to 69 millimetres have already fallen at Mount Garnett.”

A number of storm cells are sweeping across different parts of the state, including one near the Gold Coast, he says, and there is more stormy weather on the way tomorrow.

“South of about Rockhampton but especially around the Darling Downs, Sunshine Coast and Brisbane.”

Queensland Fire and Emergency Services advises that people should:
* Move your car under cover or away from trees.
* Secure loose outdoor items.
* Never drive, walk or ride through flood waters. If it's flooded, forget it.
* Seek shelter, preferably indoors and never under trees.
* Avoid using the telephone during a thunderstorm.
* Beware of fallen trees and powerlines.
* For emergency assistance contact the SES on 132 500.