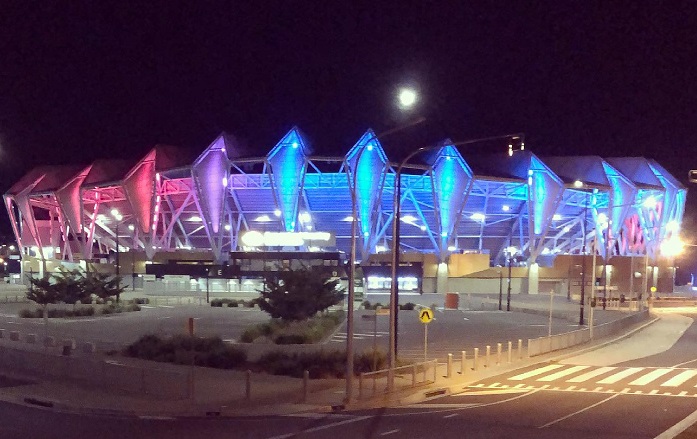 Townsville will be painted in Maroon tonight when thousands of footy fans flocks north to watch the historic State of Origin opener - the first to be played in a regional city.

Queensland Country Bank Stadium has been sold out with 28,000 tickets going within minutes.

Accommodation providers are fully booked while hospitality venues are bracing for big crowds in what is being described as a much-needed financial boost amid the coronavirus downturn.

Australian Hotel Owner Katie Kelliher says it will be one of the busiest nights in the city's history.

"The V8s are great every year, Elton John was great, the Broncos coming to play are great - but this is next level.

"The whole town is buzzing."

She says her venue has a COVID-19 safe plan in place.

Indoor businesses, such as restaurants, cafes and pubs are restricted to having one person per two square metres inside their premises.

"We do have to do head counts...and just make sure we stay compliant with the numbers we can have in the pub," Ms Kelliher says.

How to watch the game on the big screen

If you missed out on tickets to the game, it doesn't mean you can't indulge in all the Origin action.

Big screens will be set up along Flinders Street in the city centre.

Townsville City Council will also be activating Origin "live sites" at North Shore Oval and Riverway Stadium, with food trucks, live music and other family fun at the sites.

Birds of Tokyo, Jessica Mauboy and Busby Marou will perform in the Fan Zone, bringing a party atmosphere to Townsville in the hours leading up to kick-off.

“It is truly an honour to perform for you all, and I can’t wait to get back on stage and perform some fan favourites," Ms Mauboy says.

“I’m so excited to share the stage with an incredible line up of artists, in what will be an amazing night of live music and sport.”

Inspector Damien Crosby says police are well-equipped to deal with large crowds at the stadium, and extra officers will hit the beat.

"We used to have a fairly good overlay of the stadium - that will be increased."

"There will also be a police presence at the public events."

Officers will also be patrolling in the suburbs, targeting property crime.

Motorists are also being advised that there will be traffic diversions and road closures in place for tomorrow's game.

​Lowths Bridge (Rooney Street) will be closed from 4.30pm, until about 90 minutes after the event.

Some parts of Saunders Street and Boundary Street around the stadium will be no right turn before, during and after the game.

There is no public parking at the venue but a drop-off zone at Morey Street and Flinders Street.

Ample parking is available in the Townsville CBD and surrounding suburbs.

Reid Park Car Park is available via pre-purchased tickets only.