Four Vic babies diagnosed with coronavirus - Four babies are among the latest cases of coronavirus in Victoria.Health Minister Jenny Mikakos has confirmed there are 96 new coronavirus cases, brin ...
Tas virus deaths linked to Ruby Princess - Tasmania has recorded its second coronavirus death, with both cases linked to the Ruby Princess cruise ship.
Businesses switch to making virus supplies - Australian manufacturers have intensified efforts to shore up medical supplies as the federal government tries to save millions of jobs under threat f ...
Businesses jump at $130b wage subsidy plan - Nearly 200,000 employers have signed up for the federal government's $130 billion package to subsidise their workers' wages during the coronavirus pan ...
NSW cracks down as virus cases pass 2000 - NSW Health authorities are ramping up coronavirus testing in Sydney's eastern suburbs where clusters of the disease have developed within the backpack ...
Serious traffic crash, Mena Creek - Police are appealing for witnesses following a serious crash in Mena Creek on Monday night. Around 11:45PM, a 24-year-old Babinda man was travellin ...
Wesfarmers' $130m profit from Coles stake - Wesfarmers expects a $130 million pre-tax profit after selling down another lot of shares in supermarket giant Coles amid coronavirus uncertainty.
SA to use vending machines for masks - South Australia will trial the use of vending machines to distribute protective equipment to medical staff, including masks, to better keep track of s ...
Aussie experts 'unlocking' COVID-19 cure - Australian scientists are using a massive X-ray machine to map the molecular structure of COVID-19 to help find a vaccine for the virus.
Twelve coronavirus patients in ICU in WA - Seven people who were infected with coronavirus while onboard the cruise ship Artania are in intensive care at Perth hospitals, taking the total in We ...

UPDATE | A 28-year-old man has been charged after a vehicle ploughed through a group of cyclists on Wednesday morning.

Police allege the man knocked over three women and two men near Bamford Lane and failed to remain at the scene just before 6:00AM.

All five cyclists were taken to the Townsville Hospital in a stable condition, two with serious injuries.

He is due to appear in the Townsville Magistrates Court on Thursday.

EARLIER | Police are investigating after a group of cyclists was struck by a vehicle during a hit run in Mount Louisa on Wednesday.

It is believed the group of men and women were travelling outbound along Dalrymple Road when a car drove into the pack near Bamford Lane around 5.40AM.

The motorist then simply drove off.

Townsville police have since recovered a Rav 4 believed to be involved in the incident. The vehicle is currently undergoing forensic and scientific examination.

Inspector Damien Crosby confirmed the vehicle was not stolen and the police investigation has no link to recent property crime offences being committed across Townsville.

“Investigations are continuing by both Townsville Detectives and Investigators from the Forensic Crash Unit,” Inspector Crosby said.

“We would like to thank the public for the assistance and information provided to date.”

EARLIER | Five people are being treated after a car hit a group of cyclists at Mount Louisa, but the driver didn't stick around.

The motorist involved drove off along Dalrymple Road around 5:40AM on Wednesday. 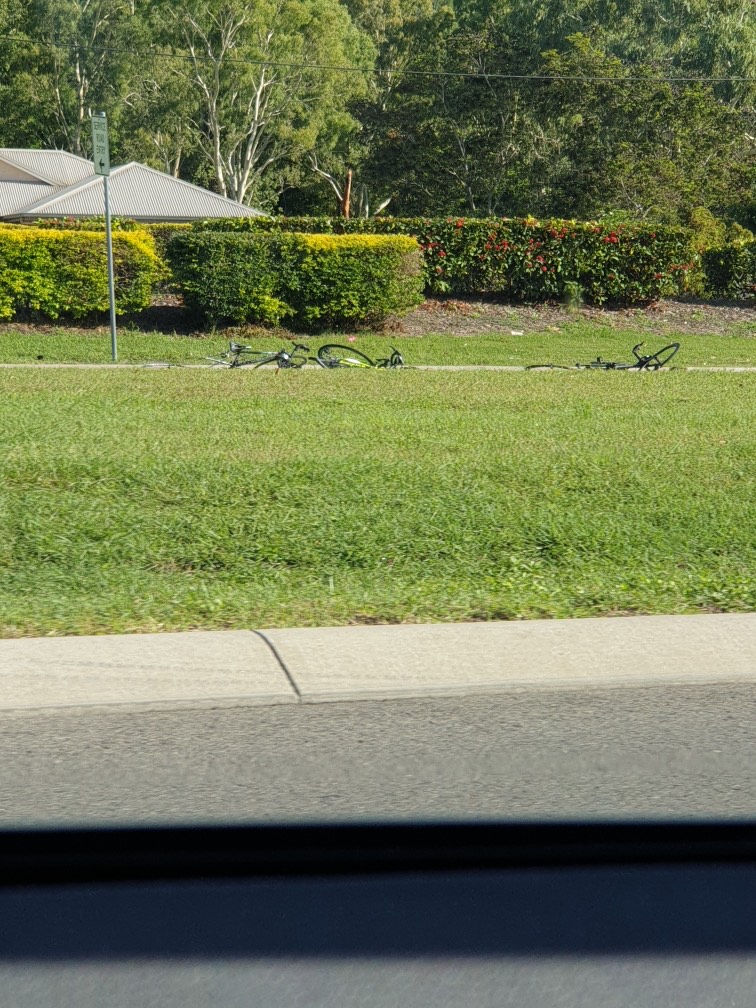 Image of the accident scene.  Supplied

Among the injured are a woman in her 50s who was transported in a serious condition with a leg injury.

A woman in her 40's was transported in a serious condition with leg and pelvic injuries.

A man in his 50s was transported stable with a back injury.

A man in his 30s was transported stable with a back injury.

And a woman in her 50s escaped with minor injuries.

TOWNSVILLE: One outbound lane of Dalrymple Rd is blocked at Mount Lousia near Bamford Lane due to a serious traffic crash. Delays are expected. pic.twitter.com/Q7mOYQ3isd

One outbound lane of Dalrymple Rd is blocked at Mount Lousia near Bamford Lane.